James Macrae Aitken and the good news is...

First of all he tried to catch me in the Noah's Ark Trap. (White did not play 8.Qxd4)

After the game I bought us cups of tea and two doughnuts, he ate both doughnuts!
When he left I noticed he had run off with my pen. (

Could you send me a copy of that page, Geoff? I can use it as provenance when I sell his pen on eBay. ("Vintage Parker, once owned by famous chess player Dr Aitken, conqueror of Tartakower...", etc, etc)
Personal Twitter @johnchess
Personal Website https://www.saund.org.uk
Britbase https://www.britbase.info
Top

In order to lighten Geoff's load in the Sisyphean task ahead of him (which, when completed, will constitute all three norms for his well-deserved international grandmasochist title), I've sent him a PGN of all the Dr JM Aitken games that I could find. It comprises 400+ complete games, with part-games and stubs making up 478 entries in total. Having done so, I thought I may as well make it generally available on BritBase here...

... as an hors d'oeuvres to the main course. Slightly more seriously, this interim file should be useful in itself as errors in existing chess databases turn up all the time, as demonstrated by the expert volunteer proof-readers who examine the files I upload to BritBase and provide valuable feedback.
Personal Twitter @johnchess
Personal Website https://www.saund.org.uk
Britbase https://www.britbase.info
Top

Thank you. You are a star.

By the time I've finished I'll be an expert in Aitken's handwriting and will add
to the Tartakower game that 'Tartakower gave me his 'lucky' pen for playing a fine game."
adding (but see the game v J. Saunders)
It will be so convincing that the pen is genuine I may even put in a bid for it on E-Bay.

OK no more from me for a while unless I need help in deciphering a name, a few are unclear and as yet ring no bell,
I'll name these 'Unclear' (not many about 3 so far) then when finished I'll do some research. Do not want to to get bogged
down when I'm on a roll. If still no joy I'll do a 'Can Anyone Help' Post with wee pics.

Now where is my Shadows C.D.
Top

"Could you send me a copy of that page, Geoff? I can use it as provenance when I sell his pen on eBay. ("Vintage Parker, once owned by famous chess player Dr Aitken, conqueror of Tartakower...", etc, etc)"

On my visit to Gibraltar in 2007, Korchnoi was rather unhappy that his pen had disappeared. I imagine a crazed collector, stroking a white cat, lurking in a large vault of chess players' pens...
Top

A new gentlemen at the Chess board. I played in the early 1980's at Dorset Congress and expected to win due to his old age and lost in 20 moves !!!
Top

Should read true gentlemen at the Chess board
Top

I'm still on the unknown Aitken Years will soon be hitting games already known which will make entering
into the main PGN D.B. easier as they will already be there, Now on Instrumental hits from the 50's and 60's.
Acker Bilk, Kenny Ball, Billy Cotton (Wakey-Wakey), Russ Conway ...all four a £1.00 Cd's.

Had The Beatles on Pan Pipes...that was putting me to sleep. Also have Chime Bell Music, have you seen this?

Will have to learn algebraic all over again after this, I'm seeing Descriptive (deceptive) notation in my sleep

Getting loads of helps from John Saunders, Alan McGowan, Andy Ansell and a few others
deciphering names where Mr. AItken just put the initials, (Thanks boys)

And yet we possibly came very close to losing Mr Aitken to Chess.

Then I think we would have heard no more from him. he would have given up chess.
I count two mates in one and a mate in two, Bf8+ (Aitken of course played 38.Kh4 and 1-0)
Top

Will be interesting to know if his game from the Bletchley - Oxford University match is in there. If it is, let me know!!!.

John Saunders has the game. (is that cigarette or a pen in the picture?)

Have recently sent book II games of Aitken games to John, some good games in that bundle including one v Julius du Mont.
A bit of a rarity his games. chessgmaes.com only have one and a pitiful biography.

Happily some other punter has added a bio in a post which includes the books:
Centre Counter Defence (1919) and Centre and Danish Gambit (1920)
I have both (somewhere) these must two of the first ever books dedicated to a specific opening.

Now searching about to try and get first names and details of other players.

Sadly I happened upon this. Flight Lieutenant Francis George Tims-Collins who was one of Aitken's opponents in 1934.
(though one of the very few games Aitken gives no date. it is between two 1934 games. Tims-Collins won.)

At this time of year when I fondly remember fallen friends and comrades,
this one sneaked up on me and gave me bout of sadness. 28 yeas old. RIP.

If anyone is interested in games played by Julius Du Mont, I have 47 of them, plus one consultation game.
Top

"Sadly I happened upon this. Flight Lieutenant Francis George Tims-Collins who was one of Aitken's opponents in 1934.
(though one of the very few games Aitken gives no date. it is between two 1934 games. Tims-Collins won.)"

Aitken's opponent in the photograph is misnamed. He was Peter Reid, and had an equally tragic end.

Geoff is making excellent progress and has now completed the input of Books 1 and 2 of the Aitken scorebook collection (covering 1931-1934). He's passed on a file of games to me to make available as part of the Aitken file at BritBase...

As a result of Geoff's endeavours this file now has all Aitken's own record of games from when he took the game up seriously in Oxford in 1931 up to Xmas 1934. There are 104 of those games, plus two stub games where I've found records of him taking part in matches during that period but Aitken himself has not set down the moves in his scorebooks. They might yet turn up but the probability is that he mislaid the scoresheets or omitted them for some other reason.

The other 500+ games in the file are the ones already in the public domain or collected by me and others before the scorebook digitisation project began. Geoff only has another 43(!) scorebooks to digitise before the project is complete. My role is to proof-read and seek out full names of players before making available online. I've been reasonably successful in establishing names so far but there is still scope for other chess detectives to try their hand (and of course proof-read the proof-reader).
Personal Twitter @johnchess
Personal Website https://www.saund.org.uk
Britbase https://www.britbase.info
Top

Sad piece of news regarding Francis Tims-Collins daughter being born a few months after he was K.I.A.

Yes it's Peter Reid I also knew about his tragic accident. Did not recall he was buried at Portree.
I was there last year. Hired a boat to spot the whales, did not see any but an Eagle took a fish
about 5 feet away from me starboard side. (note nautical term, one day in a skiff and I'm a sailor.)

I know there would be more J.du Mont games just expressing a surprise that chessgames.com have only one.

Brian, you could try offering them to chessgames.com but they currently seem to be more interested in cluttering
up their entire site with blitz/rapid games and those online game. That could be one of the best sites on the net,
it has a lot of well meaning people working on it and still the first place I go to looking for games (and then have
to dismiss the blitz/rapid junk.) but uncorrected known errors sit there for years...yes years.

Here is the Aitken - Reid game. Picture seems to have been taken with white to make their 16th move 16.Be3.
A moment captured in in time and we get to see a PGN video of the ensuing tense struggle.

Reid sacs the exchange to set up mating threats. Aitken easily defends and gives the exchange back
to pull off the Queens to go into a won ending. However it does appear he missed two Knight forks moves 28 and 41.
The game cools down to a draw. Cambridge (Reid) win the match 4-3.

Soon will hit known games so work load will be down (did I call it work...I'm enjoying it.)
In some cases I will send you photo copies of some of the actual score sheets, especially
the 'Bletchley Games.' which do have historical interest.

A very good site you have going there, happy to play a very tiny part of it.

Will have have copy for CHESS for years after this. Aitken got himself involved in some lovely games.
I like his wee comment on one game: "my shortest ever win." and he has scored it out in pencil.
So in a later book I will no doubt hit a shorter win.

(What did you think of the 'Roy of the Rovers' piece? That is one off my bucket list.
Getting a picture of Roy Race scoring a goal in a chess magazine! ) 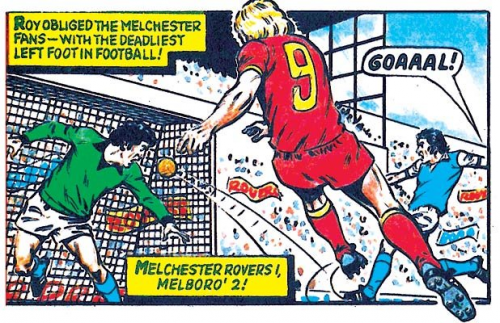