Playing chess may have had a direct bearing on Harry surviving the war:

“Without chess I would almost certainly be dead. My artillery battery was about to leave for Singapore during WWII. My commanding officer arranged for me to be transferred to Intelligence a week before they left because he knew that I must be suitable due to my chess playing. Only 6 survived out of 300.” (The Chess Scene by Levy & Reuben, p.197).

Does Stewart recall the source of the quote? A written article? A conversation?
Top

It was a conversation and you can see it was quoted in my book with David Levy. The conversation took place in Reykjavik in 1972.
Top

The only book I have is the 1981 revision of
The Penguin Encyclopedia of Chess
Edited By Harry Golombek
The original edition came out in 1977.
Top

Series about the wartime code breakers. Not sure if it will mention Harry Golombek.
Top

It is much more likely to mention Hugh Alexander, or (SIr)Stuart Milner-Barry, Dr Aitken is another possiility. Harry said that Alan Turover was a queen odds player.
Top

Googling for "Alan Turover" failed to produce any relevant results. Did you mean Alan Turing?
Top

Harry's legacy is far more in his journalism than in his games, IM though he was, of course. That's where we should look for riches surely?
Top

Harry was also a leading arbiter for many years. You don't have to rank his abilities as player, arbiter, journalist, author, raconteur. Bon Wade also had many fine qualities as did Barry Wood.
Top

I didn't realise Harry was an arbiter aswell. Clearly a man of many talents.
Top

He arbited WC matches, no less!
"Set up your attacks so that when the fire is out, it isn't out!" (H N Pillsbury)
Top

Which ones? What other tournaments was he an arbiter at?
Top

Harry arbited at various times:
World Championship
Candidates
Interzonal
Olympiad I am not certain which and what level, but certainly 1980. I was a sector arbiter and he was above me.
European Team Chmpionship
In 1972 Dr Euwe had to leave before the Fischer-Spassky match started. Harry represented FIDE in Iceland and did much to ensure the event continued
Phillips & Drew GLC Kings which I organised

He was a founding member of FIde Rules Commision. That his French was fluent must have been very helpful.

He wrote about 35 book on different aspcts of hess, including 'The Encyclopedia of Chess 1977 - from whih this list was obtained.

He won the British Championship 3 times and 60+ every time he played.

Barry Wood's skillls lay more towards organising, editing Chess and running his company. Sir Stuart Milner-Barry was mainly a civil servant, but he was another one who went to the 1939 Olympiad and he even briefly wrote The Times chess column.
Hugh Alexander also went to BA, playing board 1, he wrote The Times column for some considerable time. I have little doubt, he would have been a GM, had he devoted more time to the game. Hastings 1953 he shared first place with Bronstein, beating him in their indiviual game. To give you an idea of the amount of publicity that engendered; the gme was given in its entirety of 120 moves on the front page of the Daily Express.
Sir George Thomas was the other member of the team in BA. He was retired by the time I knew him.

It was a privilege to know them all.
Top

Harry Golombek's book on the 1954 World Championship match, for which he was a judge,
is a complete and very entertaining book. Neat analysis and full of background anecdotes.

The games themselves also contributed. only 10 of the 24 games were drawn and there was an 8 game run
in the middle of the match (games 9-16) where each game produced a decisive result! (ah...the good old days.)

On Sunday January 26th 1964 Harry teamed up with Tal in a BBC radio game. Their opponents were Penrose and Gligoric.

Gligoric and Penrose opened with 1.e4.

"I asked Tal what reply we should make."

"You choose", he said "You've written chess books. I haven't"

Source - ''The Chess Player's Bedside Book' by Edwards and Keene.

SIr Harry Golombek? (not quite he was an OBE) however America thought he was knighted.

I discovered the following piece in the October 1972 Chess Life & Review and sent it to Edward Winter who used it. 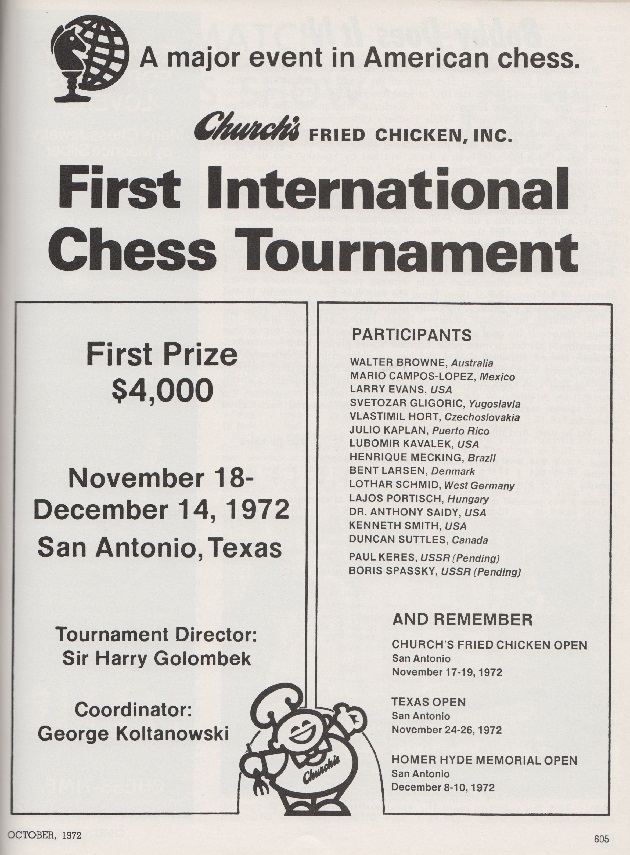 I noticed at the time that Chess Life had elevated Harry to a peerage. I don't think I ever bothered to point it out - even to Harry.

One morning he phoned me. He wet onand on about ho they had mangled his chewss column that day. Eventually I asked him, 'But whatdid you phone me about, Harry?' He said, 'nothing else. I just wanted to complain to somebody.'

Here is a bombshell for many of you. Harry was marrie, very late in his life. I didn't even fin out until some time after his death.
Top
Post Reply
73 posts